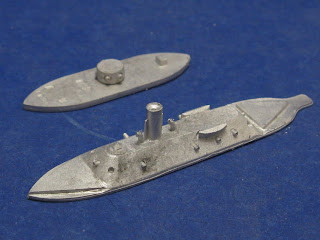 Back in June, I acquired a lot of six Civil War ironclads in 1:1200 scale, produced by Superior Models. At $5 per model (with shipping), it was a pretty modest expenditure. I have seen a fair amount of Superior ships come and go on eBay, but this was the first time I had ever seen Civil War-era naval vessels in the familiar plastic baggie with paper insert setup.

The only reason I picked these up is because they are Superior Models miniatures. I don't play any Civil War games of any sort, much less 1:1200 Civil War naval battles. But I must admit, these were just too compelling to resist! As a history buff, of course the Monitor vs. the Merrimack (I know, I know, the Virginia) is well-known to me. The introduction of ironclads into naval warfare was a game-changer, as evidenced by the launch of the HMS Dreadnought in 1875. 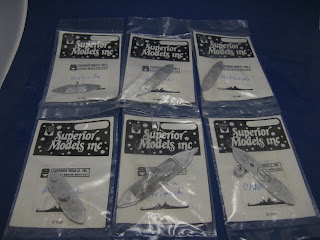 The ships shown in the above photo are (according to the packaging) the Monitor, the Merrimack/Virginia, and the Canonicus in the bottom row, and the Atlanta, Arkansas, and Huntsville in the top row. If I understand correctly, the Canonicus (or Cannonicus) is not a ship name, but rather a ship class. I don't know how many ships are in the Superior ironclads series, so if any Civil War/Superior Models naval buff stumbles across this entry, I'd love to know more about these little beauties! 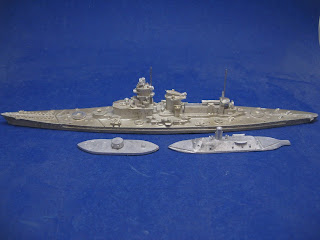 Be Prepared, the Derek Schubert way

"Be Prepared" is, of course, the motto for the Boy Scouts of America. I was a Cub Scout, Webelo, and Boy Scout back in the day. I finished my time in Scouts as a Life Scout, one merit badge and one community service project short of Eagle Scout. Painfully close, but that's how thing panned out.

I had a great time in Scouts, right up until the end. After our troop's long-time Scoutmaster (a truly wonderful man) stepped down, the new one took over. He was a dour, taciturn, no-nonsense sort of fellow. One night he pulled me aside and told me in so many words that he thought I was having too much fun, and not taking my role as a member of the Leadership Corps seriously. WTF? I thought you were supposed to have fun in Scouts...anyhow, I strenuously objected and quit on the spot. My brother Mikey, who came over to see what was going on, quit as well. So the troop lost two leaders, two experienced Scouts, two guys who liked to have fun, two brothers who did indeed take Scouting seriously.

Mikey went on to earn his Eagle Scout rank. I think I was too shaken by the events that transpired, and lost my heart to continue in my new troop. For me, it just wasn't the same feeling. Still, I look back on all the campouts, the hikes, the adventures, the friendships, and would do it all over again in a heartbeat.

Anyhow, when I came across this project by Derek Schubert on the Reaper forums, it made me smile. Derek is truly a master artist and craftsman, as well as a good egg. He will post constructive criticism and feedback that is actually helpful to painters of all skill levels.
Posted by TopKat at 12:52 AM No comments: 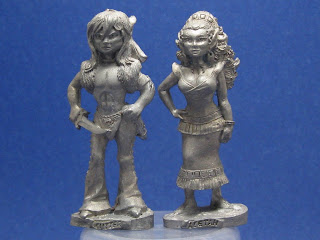 I must admit, I'm not an Elfquest fan by any stretch of the imagination. But as I pursue my collection of Superior Models minis, I find myself investigating some of the subjects that comprise both the 25mm and 90mm product lines. Elfquest, of course, is a long-running and well-regarded fantasy world, as are the creators, Wendy and Richard Pini.

For several years now, Elfquest collectors have thwarted my efforts to acquire this pair of beautiful Ron Spicer sculpts. I was finally able to snag this set because they were not labeled properly in the auction I won, which was great for me as I picked them up for a lot less than they typically sell for (usually in the $20-30+ range, if not higher).

After removing the old paint (not a bad job, just kind of old and glossy), the picture above shows Cutter and Leetah in all their 90mm glory. They top out at just under 3" tall (70mm), still on the short side compared to human-sized 90mm minis. I love the detail and expression captured by Spicer in these sculpts. For comparison, the 25mm Wizards & Lizards versions of Cutter and Leetah are just under 1" tall. I should post a side-by-side comparison picture. The minis are almost identical, save that the 25mm Cutter has a bow slung across his back.

I'll be posting more of Superior's 90mm Fantasy line in the future so you can enjoy Conan, John Carter, King Arthur, and Lord of the Rings personalities in 90mm.
Posted by TopKat at 12:11 PM 1 comment:

July already? Time for another two-for-one LMR. This one is a biggie, so put on a pot of coffee or crack a couple of Red Bulls. Think I could get my own column or show on CNBC? Come on, I could be the Jim Cramer for miniatures! Hmm, Mad Lead?

Archive: Here's a nice-looking lot of Archive old-school lead that sold for $260. Seems to be mostly from their Star Wars...I mean, Star Rovers series.

Citadel: I always dig on seeing something new (at least new to me), so this Encounter at Khazad-Dum box set was a real treat. And for just under $50, it seems like a good price for something that probably doesn't come up that often. And from the Old Lead is Good Lead files, I thought this C28 giant that went for just under $24 was a good buy. Even better buys were this C28 giant for $18.50 and this C28 giant for under $15. C28 giants for under $20 is good for the buyer, in my opinion. Then again, I have been known to be partial to all things giant. The Citadel AD&D line is not as well-known as say the Ral Partha 11-series, but it's just as good, although not nearly extensive as RP's. In any event, you can't go wrong when you can move the Magic User set (3 minis) for $53. Ah, the allure of mint-on-card goodness.

Dragontooth: The DT plastic baggies contain gold! Well, cold, hard, PayPal funds, whatever. This Saurian Behemoth & Crew brought in $72, while this Dungeon Feast at $62 was not too far behind. Ghouls eating a dead knight - a feast, indeed.

Games Workshop: As a Dark Angels kind of guy, I couldn't help but to notice that this slightly older DA Command Squad topped out at $53. Keep sets like this in mind next time you hit the swap meets or see some gaming store going out of business. And old school space marines, like these troopers in Mk. III armor for $24, continue to be very popular on the 40K scene.

Grenadier: Individually, the minis in this blister are usually $1 minis on a good day. But sell them as a complete set on a Wizzards & Warriors card, and you get nearly $30. Works for me! My Steal of the Month goes to this $1 sale of The Fiend. A giant demon/balrog for a buck? Nice score. Almost as good as the $1 Fiend was this massive Battle Giant for a mere $12.39. Seriously? I mean, someone shelled out $46 for a new copy of the Mirliton version, while a sealed copy of the original release went for $37. I still find myself drawn to the Fantastic Females of the Ancient World series, like this Princess Shaaranon for $25.

Does shrinkwrap make any difference? What about artwork? Well, how about these two Western Gunfighter sets priced at $55 versus $16?

Heritage: This seller must have acquired a shitload of inventory from an old gaming store, because he seems to sell a lot of still-sealed OOP stuff, like this Crypt of the Sorcerer for $77. Ka-ching!

Leading Edge Games: It wouldn't be a proper LMR without some Alien love, as this nice lot that went for just shy of $100 demonstrates.

Ral Partha: As a seller, you gotta love the prices that OGRE minis go for, especially the larger tanks, such as this Mk. V that sold for $44 and this one for $34. One day, I will own one of these armored behemoths. Speaking of behemoths, the Great Red Dragon always does well, as demonsrated by this $70 sale. The iconic Warhammer 6R always seems to pull down decent $$$, especially the ones still mint on card like this $40 sale. Or if you prefer, you could have dropped a cool $510 to acquire 60 mechs, including seven (yes, 7) Rifleman IICs.

Back to AD&D boxed sets, Dragonstrike is usually one of those sets that people ask $100+ for, but I think something like this one for $45 is much more reasonable, as well as this Dragon Mountain for $47. The Dragonlance Draconians set seems to fluctuate a bit - sometimes I see in the $30 range, and sometimes it goes for $54. The Red Dragon of Krynn typically commands prices around the $50 range, so this one for $21 is a bit of a head-scratcher. All that's missing is the original foam inserts in the box, but surely the foam isn't worth $30...is it??? This Huma's Silver Dragon for $53 is about par for the course. Lord Soth is a popular badass, and his Dragonlance Villains set for $57 proves that point. I really don't care for his pose & sword in this set, but that's just me. I'd rather have this arms-folded "I am evil and you are SO dead!" pose for just under $21.

The always-popular Remorhaz still commands premium prices, especially when they are complete in blister, like this one for $56, or this one for a hefty $78. I'd settle for for that is out of the blister, assembled, and crappily painted - as long as it is complete ;) And my favorite big RP dragon, the Golden Dragon of Chaos, is a sure thing too, like this one for $71. I'll never complete my Birthright collection at prices like $81 for a NIB Abominations set, but at least the 6 minis I own from this set only cost me a tiny fraction of $81.

This standing version of the Owlbear cleared $39.

The bargain hunter in me just loves this lot: 72 Crimson Skies aircraft for $233.50. That's just a tad under $3.25 per plane! I can appreciate a pickup like that.

Everyone's favorite Dark Elf ranger is an enigma, both in print and in mini form. Some days his various poses go for $20 or $30 (or more!), and some days you can get him NIB for $12, or you can pick him up for $2.36. Less than $3? Again, the cheap bastard in me isn't complaining, if I had been the buyer. As the seller, I would have been a tad puzzled. Such is the crazy world of lead speculation.

Reaper Miniatures: To hell with you! At least, to hell with your pocketbook if you covet the DOOM minis from Reaper. Baron of Hell? $37. And again for $23. This Cyber Demon raked in amost $58. Must be the gun arm thingy on him. Still haven't spent enough? Try $81 for Arachnotron if you dare.

Printed Matter: Oh, I was sorely tempted to jump in on the bidding for this copy of The Armory's Buyers Guide to Fantasy Miniatures, circa 1983. But I didn't, so it only went for $37.56.
Posted by TopKat at 12:33 AM 2 comments: