DragonTooth's Horus and the City of Magic Money 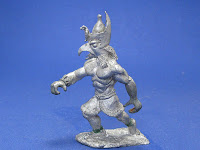 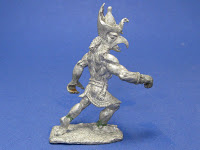 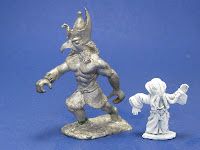 
I haven't done a lot of buying over the summer, mostly because I haven't done much selling. But I couldn't resist putting in a bid on DragonTooth's GD-1 Horus, even though he is broken at the ankles and missing his sword and sceptre. I was pleased to win him for less than $9 - that's a bargain to me, even in his current state. Now I just need to acquire his sword and sceptre...

You can see him above after he has visited my little shop of mini horrors. He has been pinned back together, and I used a bit of Citadel's LGS (Liquid Green Stuff) to fill in the gaps. I still need to smooth it out before I prime and paint, but I'm getting there.
The Grenadier mind flayer in the third picture is for scale reference. I had no idea how big Horus was until he arrived at my house. Overall height is 60mm, and measures 45mm from foot to eye. I imagine he would scale out at close to 54mm if he were standing upright. I'm glad he's posed and not standing still like a statue.
In other DragonTooth news, did you see the City of Magic sets that recently sold? If not, let me recap: King Niflung's Throne Hall sold for a staggering $898 USD! Tomb of the Dwarf King went for $521.11 - a princely sum for a king's tomb. Ye Blind Cyclops Inn sold for $316.11, and the Dwarf Armory ended at $266.
There is a deep-pocketed DT collector out there who was willing to shell out $2,001.22 to add those four City of Magic kits to his or her collection. WOW! At an average of $500 per kit, that is dedication. On the plus side, all four kits look like they are 100% complete, something that is not very common considering the age of the kits and the amount of components involved.
Posted by TopKat at 11:34 AM 3 comments:

No, I am not declaring myself the second coming of the legendary warrior Achilles. Rather, I am celebrating my return to indoor soccer after a seven month hiatus, courtesy of a ruptured right achilles tendon suffered at the end of January. My repaired tendon held up just fine - the rest of my muscles that have seen scant use in the intervening months, however, made their displeasure be known. The pain was worth it! Things started out well as we went up 2-0, and then quickly fell apart in the second half as we went on to lose 4-3. I am, needless to say, very happy to once again don my gloves and jump around and catch the ball kicked towards me at high velocity.

I have been eyeing the lead pile lately, cleaning up and organizing the mess that has lingered over the summer. Over on acaeum.com, there is a thread that shows the result of one collector's hard work: his painted collection. Hats off to Chris for the drive and desire to not only accumulate a nice stash of lead, but to actually paint every piece.
Posted by TopKat at 3:03 PM No comments:

A Rogue, Paladin, and Ranger walk into the Yuirwood...

Since our regular DM has had his hands full of late, I was suckered into making a guest appearance by some of the players who were just itching to roll some dice. Well, I wasn't really suckered into it as much as begged/cajoled, and to be honest I enjoy a little DMing every now and then. I spent some time brainstorming during our vacation in Idaho and managed to come up with some encounters, as well as a rationale for the events that unfolded.

To explain the departure of our wizard (my character) and our cleric (otherwise busy), I decided to create a rift in The Weave that was caused by the forces of Chaos. It allowed quite a few nasty creatures to enter Faerun, as well as cause an increase in the general monster population - at least in Aglarond, where our characters are based.

Most of the spellcasters were summoned to Velprintalar to see if they could band together and close the rift, so off went Garrity (wizard) and Posht (cleric). The three remaining characters - Palau the halfling rogue, Callum the human paladin, and Nikola the human ranger - were left behind in Relkath's Foot to see what developed. The guards and patrols were increased and stepped up to meet with the surge in monster activity, leaving the trio of adventurers to help as needed. In this case, they would be needed to track down the perpetrator of a heinous crime.

According to the survivors, an elf (not a drow) walked into the temple of Corellon Larethian and killed a group of acolytes, along with the acting priest. The guards who attempted to stop him were likewise killed, and the assailant walked off into the woods, heading east. Palau, Callum, and Nikola are sent off after him/her.

After about a week in pursuit, they finally catch up with the mystery elf. It looks like an elf, speaks like an elf, wears elf armor - but it detects evil and is wielding a nasty-looking black greatsword. An intense battle ensues, with Nikola effectively incapacitated thanks to a word of chaos spell. I make my first error of the evening when I "kill" Callum - he had actually done enough damage to kill his enemy, but I made a simple math error, allowing one more attack that would have killed the paladin, but quickly catch the mistake.

The party is then able to discover that the elf is actually a death slaad! The unholy greatsword was as effective against the paladin as the paladin's chaotic bane bastard sword was on the slaad. Callum would like to destroy the evil blade, while Palau and Nikola seem to think they can somehow trade or sell it for something more useful to the party. I'll let Ned (regular DM) sort that one out!

Moving on, the boys run up against my next creation: a fiendish half black dragon ettin (!) and his plain vanilla ettin minion. The pair had been wreaking havoc on a small mining community, but the miners will be troubled no more. It was fun watching the players react to such an unusual template. The theme would be repeated later on down the road ;)

A random encounter with a pair of fire giants filled out the first leg of the trip, with the power trio arriving safely at The Watchwall. Callum trained to become a level 12 paladin, and picked up Exotic Weapon Proficiency (bastard sword) so he can once again resume using his shield. Things at the wall are busy but under control, so the party decided to head back to Relkath's Foot.

On the first leg of the return trip, they come across an ogre, busy defiling a lovely elven grotto in the name of Baphomet. The characters attack the ogre in a sort of "hmm, it's only an ogre, but something must be up" sort of way. Right! The ogre in question is a 4th level barbarian ogre, who rages and attacks. It is joined by a 4th level ogre rogue and then their master - a ghour demon. The ogres are tough, but they aren't up to the combined fury of our brave adventurers. The ghour is a lot tougher and inflicts a large amount of pain, but in the end it falls.

Now just a couple of days from returning home, the party has its final encounter, and stunning one at that. Following a trail alongside a stream, they come to a smallish lake. As they move around it, they are met by the steely gaze of an abyssal greater basilisk rising out of the water. In a heartbeat, Palau is petrified and promptly dubbed "the garden gnome" by yours truly. The basilisk is TOUGH (almost 200hp) and provides a challenge to the paladin and ranger, denied the extra DPS from the sneak attacks of Palau.

Once the hellish basilisk is vanquished, and the garden gnome secured to the paladin's mount (a wingless hippogriff), Callum and Nikola complete the journey back to Relkath's Foot. There they learn that the rift has been closed (yay!) and all is back to normal. Well, with the small exception of an unknown quantity of chaotic-aligned creatures now running loose in and around Aglarond, that is to say.

All in all a successful evening of D&D for all concerned, I have to say. I had fun in my role as guest DM, even with all the extra work that comes along with the job. And the players gained a good amount of XPs, along with a modest amount of treasure (uber evil greatsword notwithstanding). Callum dinged 12 pally, Nikola is close to 12 (I think), and Palau has enough to ding 13 rogue - once we manage to un-garden gnome him, of course :P

Now that I'm back from my last major family vacation and school for the kids is nigh (only two more weeks of freedom!), I know the lead-oriented content on TLD will resume at my normal pace. Thanks for reading!
Posted by TopKat at 3:47 PM No comments: