I've been dragging my feet - well, at least my right foot (still in a cast for another 11 days). As February winds down, it's time to recap January's lead activity.

ASGARD: Now this is a good-looking dragon! I'm not crazy about the pose, but it's big and mean-looking so that's good enough for me. $47 is what it took to bring him home.

CITADEL: You gotta love those crazy Brits! Who else would sculpt Indiana Jones as an aardvark? This unreleased Weird Fantasy sculpt went for $185. It's always tough for me to watch when a C28 giant pops up and then sells for way more than I'm willing to pay for one, like this ugly fella who sold for $38. This one with an eye patch head sold for $30. I picked up one of these Chronicle Fire Giants for around $3 in a sweet lot of giants, but this one went for $39. When a seller lists an AD&D blister for $11, it's just not going to last long. If AD&D creatures are on your list, say a pair of Mind Flayers, it will set you back $13 and $9 respectively. I was watching this classic Marauder giant that sold for $36, but didn't pull the trigger.

DRAGONTOOTH: It was a good month for the works from Tom Loback General Artwork. This minty-fresh looking City of Magic Dwarf Armory sold for $105! This set was so pristine-looking that I even had to bid on it. I hope the new owner treasures it. The funny thing is that the combined value of the next two pieces almost was enough to buy the Dwarf Armory! Some collector paid $55 for the large table and $41 for the small table from the Magic Shoppe. Yowsers! And then at the end of January, a minty and complete Magic Shoppe appeared and sold for only $57!!! And just when you thought it was safe, ANOTHER Dwarf Armory showed up, selling for $89, even though it was only the metal pieces - no packaging, paper, or plastic to be seen.

Another DT piece that I bid on and lost was MB6 Griffon with Nest, Eggs, and Griffon Chick. It sold for $47, even with the missing chick. To me, it is one of the iconic DT minis, good enough to be used in one of the beautiful full-color ads in Dragon magazine back in the day.

And then there were not one but two MB7s - a MOC MB7 Seawitch (mermaid) sold for $22, and another one loose but with card for $17. It's interesting to see the packaging differences - the MOC example is on the black/red/yellow card, and the loose one is on a greenish/bluish card. I'm assuming the latter is an example of an older card?

FASA: I hate it when sellers only offer local pick-up. So if you were a Star Trek collector who wanted this big $271 lot, you were SOL unless you could convince the seller to ship to you.

GRENADIER: Back in December, I picked up the Goblin War Giant for $50. January saw me acquire the other big Grenadier giant - the Battle Giant, and for only $21. Gottta say I'm happy to finally land him and at a decent price. There were plenty of other Grenadier bargains to be had in January: Princess Achmiri for $11 (ambitious sellers sometimes want upwards of $75 to $100 for this set); the iconic Balrog with the flimsy sword help upwards for $8; the Colossal Lords Female Frost Giant for only $16; and four Giants Club giants for anywhere from $8 to $13 - the Fire Giant (complete sans box) for $8; the Dwarven Giant for $10; a complete and minty-looking Fire Giant for just $11; and the Stone Giant (no box) for $13. My kind of bargains! Even this 6-pack of dragons was only about $10 per blister.

HERITAGE: The Demons & Devils boxed set always moves well, as evidenced by this $86 example. Another popular but uncommon (if not truly rare) model is the Great Dragon. This one originally showed up as a generic dragon, but someone alerted the seller they were selling a nice piece. It is missing the tail, and has no packaging, but still sold for $32. On the other hand, if you sold a complete Great Dragon with the original packaging, you could expect prices in the neighborhood of $120.

LEADING EDGE GAMES: This...is my boomstick! While not as popular as Aliens, LEG's Army of Darkness sets are still pretty cool, especially the Death Mobile ($58 at an S-Mart near you). Death to the Mortals and Deadite Champions were only $11 each, great finds if you're into Ash & Co.

RAL PARTHA: I've always thought the Minotaurs of the Imperial League were pretty neat - very ornate armor, shields, and weapons. Not your traditional minotaurs by any stretch of the imagination. This complete trio sold for $19. Lately, it seems like prices for the 11-series (at least those still carded) have been trending down for the most part. Here are a few examples: $24 for a Marilith; $21 for the Sahaugin; $18 for the Birthright Chimaera; $15 for the Skrag; only $10 for the Ettin; and a bargain I missed out on, Birthright's Bansheigh & Justina for a mere $2.25!!! Lord Soth (mounted & on foot) for $25. Mimics for $16.

One of the only 11-series exceptions is of course the Remorhaz. Still going strong, like this example for $72. And RP boxed sets are still highly valued and sought after, even if they are open like this Planescape set for $70. Almost doubling that price was Dark Sun's People of the Land for $138.

Oh, and there was another Molydeus sighting! This lot that sold for $183 had Molydeus and a gaggle of dragons, among other items. I like the buyer who asked the seller to list it for a $65 BIN. Nice try!

BattleTech minis continue to be an unstoppable force, both on the table and to the wallet. This modest lot sold for $123, while this 5 Mech lot (on orange cards) sold for $161. It's still going to set you back close to $40 to get a minty Warhammer, like this one for $39. Dig a little deeper if you like Marauders, to the tune of $58 for one like this. Lots of Mechs and parts in various stages of use can still net the seller $84.

REAPER: I could buy a lot of Reaper minis for $79, or you could buy one Cyber Demon. Your mileage may vary.

WEST END GAMES: $34 for The Return of the Jedi, a Storm Skimmer, and the Imperial Speeder Bikes seems like a good deal, especially the two vehicle blisters. Or you could have spent your $34 on this lot of loose minis, including some speeder bikes. Take your pick! And someone paid only about .50 per mini on this lot of 38 that sold for $22.
Posted by TopKat at 10:52 PM 5 comments: 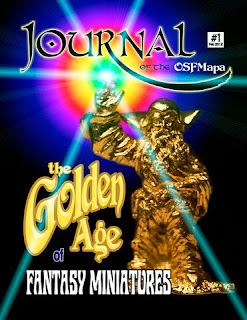 Issue #1 of the OSFMapa Journal is out! After months of planning and work, the various ramblings and musings about all things lead has been printed, bound, and sent to the members.

For those of you who have not heard about it, the Old School Fantasy Miniatures Amateur Press Alliance is a group of dedicated lead-heads who plan on turning out three journals each year, filling the pages with articles and information about fantasy miniatures. All you need to do is write at least one two-page article for each journal, and pay your annual dues. That's it!

The goal is simple: "The Old School Fantasy Miniature Amateur Press Alliance (OSFMapa) is an amateur press association (apa) founded with the purpose to provide serious fans, collectors, and artists of fantasy gaming miniatures with a forum and a publication for communication and study of matters relative to our common interest in the history and artisty of fantasy miniatures." (from the Rules of the OSFMapa)

Articles in Issue #1 cover LOTR minis, Grenadier's huge Giant Griffon and Giant Dragon, artist Robin Wood (including pictures of minis painted by her circa 1979 or thereabouts), and early painting guides to name a few. You can tell just by reading each article that the contributors are true fans of the genre.

You can stop by Mike Monaco's Swords & Dorkery blog to check out his write-up of Journal #1. Mike is a fellow co-conspirator, and even included the complete table of contents in his post.

Big thanks to all my fellow contributors, and special thanks go to Scott Burnley, OSFMapa's Central Mailer (the logistical brains behind the operation) for making this happen! Make sure you stop by the OSFMapa Yahoo! Group if you have questions or are interested in joining. Thanks!

I noticed that eBay seller neatminis has a bunch of interesting stuff currently listed, including a Grenadier LOTR Hillmen of the Trollshaws 7504 that is NIS. At $40 or best offer, I don't think this one will last very long ;)

UPDATE: OK, that didn't last long. Sold for $32 to some lucky collector!

Oh, and my RP and Grenadier auctions are ending this Sunday (the 19th), so take a look if you have some time. Thanks!
Posted by TopKat at 9:19 AM No comments:

OK, so it's been a couple of weeks since my last post. I ruptured my right achilles tendon at my weekly indoor soccer game at the end of January, and I've been hobbling around ever since. Even the most mundane task (like taking pics of minis) is now a chore, but I finally got motivated and took some pics of a few recent acquisitions.

First up is a subject near and dear to my lead heart - that's right, giants! I've been pining after a copy of Grenadier's Battle Giant for a few years now, so when I snagged one for the bargain price of $21.02, I was pretty damn pleased.

He's big (check out the reference photo on the LMW) and he's heavy (four pounds!) and he looks absolutely pissed off and ready to do some serious damage with his two-handed tree trunk of a mace!

I took some pics of the parts, which I will post to the LMW was soon as I optimize them for posting there. Here's a shot of the box with all the parts: 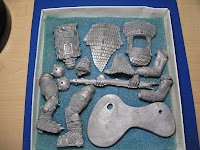 Next up will be the other Grenadier giant, the Goblin War Giant. Following that up will Special #2, the Giant Griffin! Can't wait for that bad boy to show up in the mail.
Posted by TopKat at 3:37 PM 1 comment: