About a week ago, I woke up one morning to find an email alert in my inbox that I had all but forgotten about: Powell's Books had finally received a copy of Fantasy Role Playing Games by J. Eric Holmes, M.D. Yes, the same Holmes of Holmes Basic Set/Holmes Blue Book fame. I cannot recall for the life of me when I signed up for this alert, but I'm pretty sure it's been well over a year. And when I logged in, the book was still available, so I quickly snapped it up. It set me back $10.95 + shipping, which was about 1/10th the price this book usually goes for on eBay or Amazon. Thanks, Powell's! You guys rock.

I am traditionally a read-every-page-in-order kind of guy, but since this tome isn't telling a story I didn't feel any remorse for skipping ahead to Chapter 11: Little Metal People. I tried to read it with a mindset of "pretend it is the early 1980s" and not 2015. It is a good general-purpose miniature primer, discussing how the fantasy market evolved from the wargaming market, who the prominent manufacturers were at the time of writing, and some basic how-to info on prep/priming/painting.

Still, there are enough little nuggets of info that make the chapter a fairly interesting read. Minifigs, at the time one of the bigger companies, apparently did not track sales by number of miniatures shipped, but rather in tons of metal shipped! Heritage was also one of the heavies, and the trio of Ral Partha, DragonTooth, and Archive were singled out as new companies.

There is a delightful photo (all the pics are black & white) on page 167 that shows a swarm of Minifigs pig-faced orcs on the attack. Classic D&D imagery, and it immediately made me think of the orcs in the Monster Manual.

Archive is called out for having "a regrettable tendency to make castings of Japanese or Chinese toys and sell them as new figures (their "land-shark" is an example), but they also produce a number of figures that appear to be genuine originals." 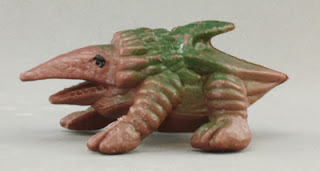 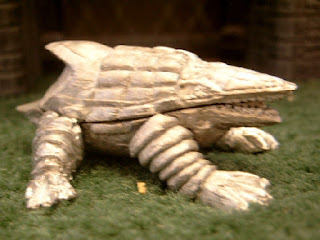 Again, not new information at this point in time, but a very keen observation back then.

Dr. Holmes gives Tom Loback a shout-out: "Dragontooth Miniatures makes a line of utterly delightful fantasy armies." He singles out the Amphibians and Saurians in particular.

He then moves on to discuss female miniatures, and how many early castings were in the nude/nearly nude variety. "It was several years before any of the figure companies realized there was a market for lady adventurers and sorceresses who dressed appropriately to their role and did not look as if they were about to star in the middle of a Las Vegas nightclub chorus line."

Regarding dwarves, specifically female dwarves, Holmes states "There is a sharp controversy within TSR Hobbies over whether a female dwarf wears a beard. Since Gygax insists she would, perhaps there is no hurry to produce a game-playing figure." Nowadays we can find female miniatures dressed (or undressed) for battle thanks to companies such as Reaper, Red Box Games, Hasslefree, and Freebooter.

Another photo that caught my eye was on page 177. It appears that in the dark pre-battlemat days, gamers used what they had to produce a suitable playing/mapping field. It looks like a plain wooden table (which may or may not have been painted/stained) is used as the mat, and chalk (I think) is used to draw corridors and terrain in place of water-soluble markers.

EDIT (11/18/15): If I had actually read the book in order, I would have read the following passage on page 93: "My own gaming table is spray-painted with "chalk board paint" so that the green surface can be marked with chalk and then, when the characters move on, a new set of doors and walls can be drawn around them. In this way, the little figures never move off the table, they only move to new positions as the scenery shifts around them."

For a minis guy like me, Chapter 11 was worth the purchase price alone. I have since started the book from page 1, and as a D&D generalist, it has so far been an entertaining read, again taking everything from an 80s perspective when at all possible. I highly recommend this book, and remember to sign up at powells.com to receive alerts for this and other uncommon titles.
Posted by TopKat at 7:43 PM 4 comments: