After several years of searching, I finally secured a couple of WWII Russian tanks from Superior Models. They are 1/108th scale (1 inch = 9 feet) so pretty much 15mm (which is 1/107th scale). They go back a long way, originally created under the Comet brand during WWII as identification models for the U.S. military. Comet sold the molds to Superior in 1962, and then Superior sold them to Custom Cast sometime in the 1970s. Quality Castings picked them up in the 1980s, and sold them to 19th Century Miniatures in 2002. Whew! You can still buy them from 19th Century here, but they are newer, refined versions of the original castings. Plus you can also buy post-WWII AFVs if that's more your speed.

First up is the KV-1b (5200). The T-34 usually gets all the attention when it comes to WWII Soviet tanks, due to many factors: ease of production, speed, armor, and firepower. Early on, the KV-1 was more than a match for the German light and medium tanks with their small caliber and short-barreled main guns. In the end, the T-34s advantages (half the weight, twice the speed, same or better main gun, lower cost) doomed the KV series. But they served their roles well, and should not be overlooked. 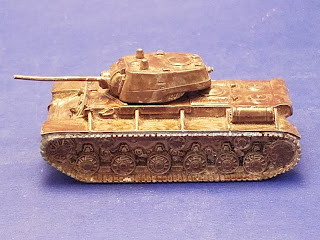 Next is the T-34/85 (5206), which was very poorly packed for mailing and did not arrive intact, with only a small piece of the main gun barrel rattling around in the box. I'm going to attempt field repairs in my depot and replace the missing barrel with small brass tubing. I'll post that as a follow-up once it happens. When the Soviets upgraded the main gun from 76mm to 85mm, the T-34s could now engage Tigers and Panthers from the front with an increased chance for success. The German tanks still had the advantage of range, but if you have the numbers, speed, and maneuverability of the T-34, you can close the gap and overwhelm your foe. 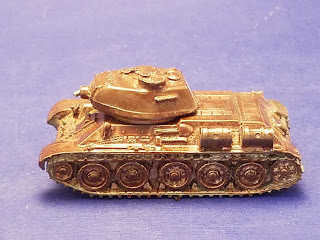 And this is what they look like side-by-side. I'll have to dig through the lead pile for some Heritage Panzertroops 15mm tanks and take a comparison shot. 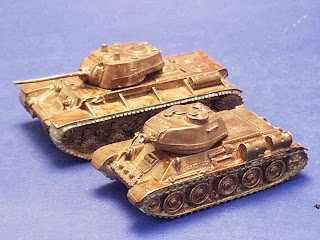 Posted by TopKat at 1:47 PM No comments: