In my last post, we wrapped up our long-running FR campaign. A brand-new FR campaign is spooling up, which means I get to pick and paint a new batch of characters for us to field against the DM's never-ending hordes of monsters. Once again, I'm going with Reaper minis to represent our band of intrepid explorers. Our new adventuring party consists of a druid, fighter, cleric, sorcerer, and a rogue. Here's some WIP pics, and my apologies for the quality. They are quick snaps from my phone.
My druid is the first 3E/3.5 tree-hugger since we started playing this ruleset. I can't recall the last time anyone played a druid, so I'm pretty sure we're talking way back in our 2E days. I'm really looking forward to this! At first I was going with 03484 Karlov Diedrich, Wizard because he just looks like a druid to me. I ended up choosing 03201 Damian Helthorne, Bandit because my druid serves Mielikki, and her druids are allowed to use the same weapons and armor available to rangers. So yeah, he looks more like a ranger than a druid, but that's my aim. Oh, and he's Aasimar, just to be different. 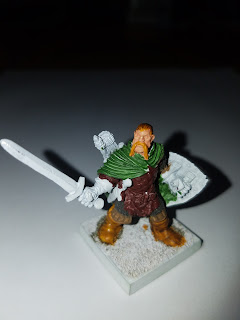 Dino is playing a human fighter, so I picked 03317 Kale Nolan, Heroic Warrior for him. He's been sitting on the lead pile, based and primed, because I knew I would use him sooner or later. His skin is too yellowish right now, but I'll work on that. Don't want him to look like a pirate with scurvy! 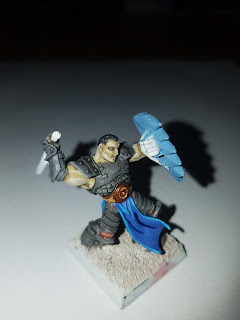 Matt is the medic this time, and 03365 Argonnite, Elf Cleric will be his half-drow cleric. I love the fact that Argonnite came with a weapons sprue so you could choose from a sword, mace, or bow. Maybe I'll stick a small spider on the base, just to remind him Lolth is not happy about a male half-drow cleric running around. 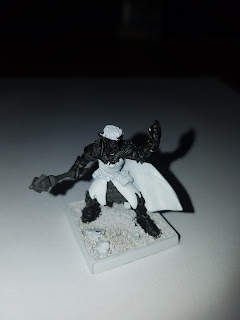 Steve wins the Best Prepared Dude Award for this campaign. Not only did he pick out and purchase 03381 Satheras, Elf Warlock on his own, he even told me he wants me to paint his sorcerer in a more neutral palette. That foiled my plans to paint him up in lovely shades of lavender and salmon. 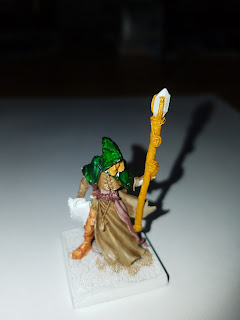 The rogue pictured is 03062 Darnath, Male Elf Thief. That was before Craig decided his rogue is going to be a gnome, so I narrowed my choices down to 02959 Marius Burrowell, Gnome Thief or 03099 Klaus Copperthumb, Dwarf Thief. Klaus just arrived in the mail yesterday, so he'll be getting based and primed this weekend. 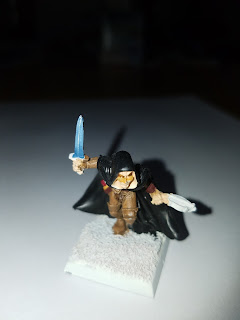 Oh, and I'm also working on some critters for Ned! Don't want the DM to feel left out. I'll post those WIPs next time.
Posted by TopKat at 3:31 PM No comments: