It has been brought to my attention that it's been nearly a month since my last post. Has it been that long? I hadn't noticed...honest! To get things rolling again, I give you (hold your breath) a completed project (gasp!): 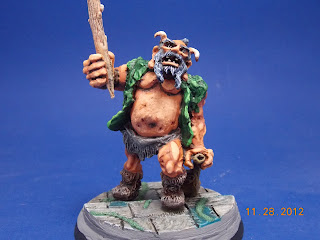 This is the end result of a project that started two years ago when I purchased this fella along with some of his giant brethren for a song. I really wanted to do this one justice, give him some oomph, so to speak. But how? Basically, it came down to his base - I wanted the PERFECT base to mount him on, as the integrated base he came mounted on was less than ideal.

So began my long search for the perfect base. It had to be something special, as I wasn't crazy about his stock pose - he's leaning over a bit too far for my liking, even if he's likely about to mash some poor fighter with his massive tree trunk club. I did a LOT of searching, combing through base after base on the intertubes until I finally found what I was looking for. I really like Secret Weapon Miniatures, having purchased some bases for my Dark Angels army previously. MisterJustin and his crew do a bang-up job and are a pleasure to work with.

Now that I had a base, it was down to work. Snipping away the old lead base was fairly easy - I just needed to take my time and cut slowly and carefully. It took more time to file down the bottoms of his boots than to cut off the original base. Then it was time to fit him for pins and do some drilling. Once that was done, it was on to priming and painting.

My goal was to give him that old-school high fantasy look - I wanted him to look like something you might find in a DragonTooth ad, circa 1979 or so. Taking my modest painting skills into consideration, I have to say I'm very pleased with the final outcome. 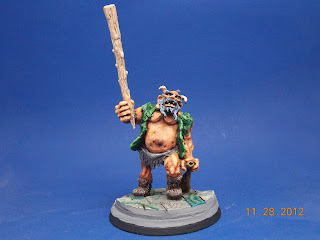 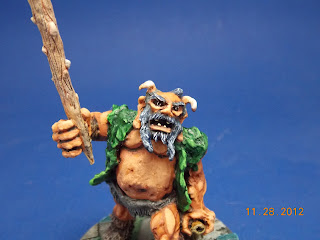 And here he is, ready for his close-up.

The next couple of pics show him from various angles: 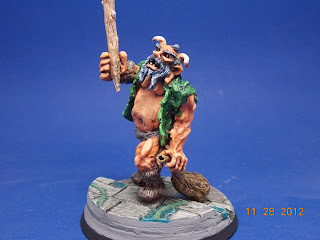 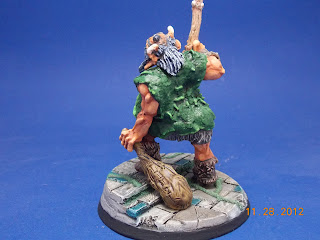 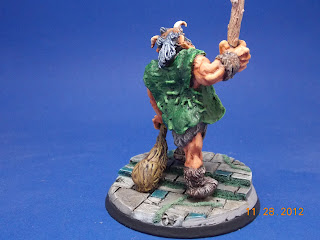 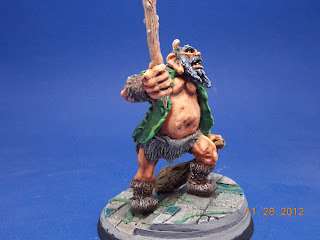 Hopefully it's obvious why I chose this base for him. The climbing pose is spot-on, with plenty of room for his loot bag in tow.

Next, I tackle my other DT giant - Big Meg and her stewpot. Hopefully this one gets done in less than two years! Thanks for stopping by, and don't hesitate to leave a comment.
Posted by TopKat at 1:01 PM 1 comment: