OK, this LMR is like a hydra - it doesn't seem to matter how many lots I list because the report just keeps growing and all the lots still to be listed doesn't seem to be shrinking! So I'll split this report into two parts, and add everything else to Part Two. That's what I get for waiting so long to complete an installation of the LMR. Hope you enjoy it!

ASGARD: Here's one that doesn't pop up very often: a big old Asgard dragon by Nick Bibby. This one sold for a reasonable $31, with a couple of RP dragons thrown in for good measure. Looks like the rider and saddle aren't included, but it's still a very neat and very large piece of old lead art.

ARCHIVE: A few baggies of old Star Rovers minis came and went, like this Roberker (robot worker perhaps?) that sold for $18, and this Krushaugga that went for $22. Funky old-school sci-fi lead goodness.

CITADEL: Some AD&D blisters showed up for the party as well: 2 Carrion Crawlers ($28 and $18), 3 Gorgons ($23, $23, and $21), 1 Rust Monster ($29), and 1 Giant Rat ($12). Loose ADD series included an Umber Hulk for $12. In addition to the $18 Carrion Crawler, I also managed to score a Beholder and a Gorgon for $12 - yay me! I would have enjoyed adding a Gargantuan Fire Giant Lord to my collection, but the overseas shipping usually kills it for me. $14 seems like a very reasonable price, shipping notwithstanding. $24 for a C28 giant seems par for the course for these giant-kind.

Citadel dragons, on the other hand, are usually both rare and expensive. Kegox the Kevin Peat Dragon sold for $92, and this Great Spined Dragon sold for $100 in all it's minty glory. And I'm pretty sure the center dragon in this $104 lot is also a Great Spined Dragon. On the more affordable side of the fence, how about this lot of 8 minotaurs for less than $5/mini? And from the current crop of LOTR minis, it doesn't get any cheaper than this metal Cave Troll for less than $6! Lastly, a buyer snapped up a small group of Citadel/Marauder lead for under $25.

GRENADIER: From the "A Miniature That Is Really And Truly Rare" files, I give you this assorted lot that sold for $169.50. That breaks down to about $2.65/mini - a little higher than normal, but on the surface still a decent deal. But what makes it so special? In the first picture in the auction listing, notice the lizard man in the top right corner? Look familiar? Why yes, he DOES look almost exactly like the old TSR logo! According to my fellow collectors over at acaeum.com, Grenadier made an extremely limited run of these lizard men back when they were bidding on the licensing rights for AD&D minis. Very cool! And then there was this lot of 3 Grenadier rares: the gold-plated Basilisk, a gold-plated dragon pendant, and the same dragon in un-plated form. Your cost? A modest $70.

Not one but two W55 Giant Cave Spiders for .99? I forgot why I didn't bid on this lot. Steal of a deal for two nicely sculpted big lead spiders. Uneducated sellers frequently start their Fantastic Females boxes around $100 or so. I think $21 for the Water Nymph is more realistic, but then again I am a cheap sonofabitch. And since I am cheap, I did not bid on any of the following Gamma World blisters that sold:3 blisters of G-14 Human Tribesmen went for $57, $51, and $47. Some G-21 Power Armor Troops fetched $37. There were several others from the same seller that I missed tracking, but I'm sure everything went for appropriate prices. The Grenadier bargain lot of the month goes to this lot of 10 Fantasy Warrior blisters for $3.75 - that's .375 cents per blister!

HARLEQUIN: I almost never post anything from Harlequin, but this Giant Mountain Troll was just too cool to pass on. And for under $7, I wish I had bought it! You can never have too many giants.

HERITAGE: Someone ponied up $160 for a new in shrink box of Galacta - Galactic Rebellion. I guess if you are going to go big, you might as well get a nice, complete, minty set. Back down in my price range, $32 bought a collector the Giants box set, along with all ten minis from the Mines of Moria box set. I didn't see the Frost Giant's axe head, but at least the Storm Giant's lightning bolt was present. For a mere $10, you could have owned three packs of River Trolls and three packs of Mind Beaters. My guess is a reseller snapped these up, because 30+ figures sold at even a modest $4/mini is going to make you a profit of $100 or more. I had to pick up the LOTR Painting Guide when the seller dropped the price to a more reasonable $35. And just because it was available at the same time, the movie poster that shares the artwork with the painting guide.

There were enough John Carter, Warlord of Mars blisters that recently sold to warrant their own paragraph! Here we go: John Carter mounted on Thoat with Deja Thoris and Woola went for a cool $133. A second copy of the same set was much lighter on the wallet at $53. Tars Tarkus? Not the usual $75-$100, but a very reasonable $33. Black Pirates of Barsoom ($61), Phor Tak, Mad Jaharian Scientist ($36), Solon of Okar ($31), and Synthetic Men of Mars ($30) round out the rest. And someone snapped up a couple of bargains: 2 blisters of Orovars, Horz, and Lotharians with Bowmen for $20 each, and The Mesena (Catmen) of the Thurian Moon also for a low, low $20.

MANZAKK PUBLISHING: Hey, we have a Finieous Phigures sighting! This complete set with box commanded a neat $82.

MINIFIGS: You know him, you love him, you hate him...Demogorgon! The Minifigs demons usually do well, and this one for $52 was no exception to that rule. Other demons included two Type VI ($31 and $28) and one Type IV ($27).

RAL PARTHA: As a giant collector, I wish I would have picked up this copy of Avalyne the Life Giver for only $23! That's a kickass deal, considering I see the giant alone usually being offered at around $40. Someone bought a Peryton for $42, which is probably the lowest price I have seen in a long time. And speaking of low prices for 11-series critters, how about these Remorhaz that went for $58 and $47, respectively. I would have been fine paying for one of those uglies at that price point. Like the Peryton above, the Black Abishai also sold for $42. I love to see alternate sculpts go for more than reasonable prices, like this seated Displacer Beast that was only $10.50. Nice kitty! Molydeus, on the other hand, continues to sell consistently high, like this one that went for $78.

The Bronze Dragon of Pern is another one of those uncommon to rare sets, so to see one like this go for $103 is pretty neat, especially if you are the seller.

REAPER: Why is it whenever I need a spare $5K I can never seem to find it? This would have been a great lot if you had a store and could justify the expense. If I had told the missus "Honey, I just dropped 5 grand on 1,500 minis!" I can only imagine the trouble I'd be in... If DOOM minis are your thing, you probably would have been pleased to spend under $25 on this Cacodemon.

WOTC: 13 blisters of the Third Edition minis went for just over $2/mini. Great price on a often-overlooked line of official D&D miniatures. With that in mind, I was a bit surprised at this lot of 23 blisters that sold for $200, or about $9/mini.

LOTS-R-US: I wish I could see every mini in this lot! 228 minis for $100 is a sweet bargain IMO. I hope the buyer got some good ones! In this $33 lot, I see Mithril minis, a Grenadier Juggernaut, and various dragons and/or dragon parts. There's a bunch of Grenadier minis and a nice Superior dragon in this lot, but $61 is a bit higher than I would have paid for it. Am I missing something really cool? Still, we're only talking a bit more than $1/mini, so still a nice deal for the buyer. I don't think I've ever seen EIGHT umber hulks in one lot before, but this one had them, along with some nice old Archive and Citadel minis too. $158 is a pretty steep price, and I see the buyer still hasn't resold the Citadel, Grenadier, and RP hulks. And this $69 lot has some neat pieces from TA-HR, Citadel, and others. At just a bit more than $4/mini, this was a good buy. OMG I love all the glossy enamel paint on the minis in this tackle box! For $100, I have to say this lot was a great buy, and that doesn't even include what the books might be worth.
Posted by TopKat at 5:09 PM 1 comment: 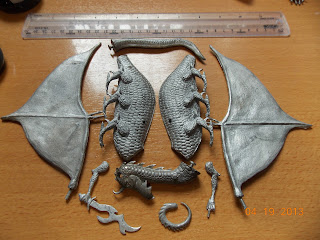 The Great Sro: Some Assembly Required

I recently picked up a large dragon that I couldn't readily identify, but still looked at least somewhat familiar - you know when you've seen something at least once, but you just can't put your finger on it? So after some poking around on LMW and SoL to no avail, I stopped by leadpoisoned.com and found what I was looking for: NH-005, the Great Sro armed with sword from the Legions of the Petal Throne line of miniatures.

This line appears to have been sold under several brands - The Old Guard, Murray Miniatures, and eventually Ral Partha. Mine says copyright 1975 T.O.G. - T.S.R. inside the right half and SRO by Murray inside the left half. I'm assuming TOG stands for The Old Guard.

Sro is pretty big hunk of lead, weighing in at almost 1 pound 9 ounces. He measures 9" from snout to tail, and each wing is 6.25" so his wingspan when assembled should be around 13.5" or so. I wasn't able to Bing/Google any particulars about Sro, so I'm pretty much in the dark about his background, stats, or how he fits into the grand scheme of all things Tekumel.

The pose isn't terribly dynamic, as all six legs are pretty much lined up the same. Where it does shine a bit is the arms: the left arm pointing right at YOU! and the right arm brandishing a nasty-looking sword that could be metal or could be a flaming sword. The overall sculpt is very nicely done and just screams old-school from just about any angle. The snout has a unique look, almost as if covered by a piece of plate armor. The only downside is he appears to be missing one of his two curved horns.

Overall, the Great Sro is a very, very cool dragon for your Empire of the Petal Throne or other fantasy game. I'll most likely trade or sell this magnificent fella, as I have no plans on starting a Legions of the Petal Throne collection.
Posted by TopKat at 5:35 PM 1 comment: