Rip Off? Knock Off? Or Fair Game?

In my time spent cruising lead listings on eBay, I've come across more than one seller peddling what appears to be cheap recasts of miniatures that are no longer in production. I use "cheap recasts" to describe the quality as viewed from the pics in the listings, which is not the same as holding one in my own hand, of course. Still, from what I can see in the pics, the level of detail looks anywhere from middling to downright shoddy.

Now, to be fair, the sellers are not attempting to pass off their versions as authentic, or even use the manufacturer's name or product lines or proper miniature name/ID. I'm just going to guess that they saw a mini they liked and started making copies of it.

What I think I'm getting at here is this: What are the legal and moral/ethical implications of making copies of miniatures that (again, I'm assuming) aren't their own or they are not the holder of the master molds or casting rights?

I'll be the first to admit that I have ZERO knowledge of how the miniatures industry functions from a business and legal standpoint. And I suppose when we are dealing with companies long since out of business (such as Superior Models, Inc.), and unknowns such as there whereabouts of master molds and who may or may not own the casting rights to any given line of miniatures, the waters become even muddier and more turbulent.

Case in point: I have seen this listing on ebay before, which is of course a copy of Superior Model's WL-006 Magic Master. The seller has over 17,000 transactions and a 99.6% feedback rating, so it's not some one-hit wonder. (Sidebar: if you read the negative and neutral feedback, the seller comes across as rather...rude?)

I contacted the seller via eBay Messaging and asked them this question: "I was just curious if these were made using the original Superior master molds, or are they cast from molds that you created? I can't tell from the photos if they have the same level of detail as the originals or not. Thank you!" to which they replied "as you know. molds burn out."

Hmm. OK. Thank you for NOT directly answering my question. So I'm going to go out on a limb here and assume this seller does not have the master molds or casting rights to WL-006, and is casting with his/her own homemade molds. Maybe it is of little or no concern because we are dealing with long-OOP miniatures from a defunct company. But if someone were to make cheap casts of something from Reaper, Iron Wind Metals, or Games Workshop, I don't think that would go over so well.

I guess it just really bothers me that people copy the work of others for their own personal profit.
Posted by TopKat at 11:18 AM 3 comments:

I've been hacking away at my DA scouts, and while I feel I'm getting close to finishing them, I've also been a little frustrated. There are so many details on them! Grenades (3-4 different kinds), pouches, holsters, weapons, armor, commo gear, skin, eyes, hair, etc. Looking back, I probably should have picked a standard tactical squad to paint up first. Oh well, just a bit more work.

A couple of posts back, I talked about the new Peryton from Center Stage Miniatures. I really like the look of their Sea Devils, so I ordered the three different sculpts available. I'll be sure to post a product review once they arrive and I get a good look at them.

We finally decided to replace our aging PC with a new laptop, complete with a 24" monitor and docking station. A couple days after we place the order, the old PC stops working! Seems to be a hard drive issue. But lo and behold, the new rig arrives a day or two early, so I'm back in business. Huzzah!

And for those footie fans out there who have not already seen it, here's a link to the Wayne Rooney bicycle kick goal he recently potted against Manchester City. Brilliant!

That is all for now. Until next time, happy painting and prosperous gaming.
Posted by TopKat at 1:37 PM 3 comments:

A couple of interesting auctions are up and running, with the proceeds going towards helping those affected by the major flooding in Australia. Take a look and see if you can help out our friends down under who could use a hand right now:

First up is a nice-looking signed and framed print that shows the three living recipients of the Victoria Cross for Australia. Two of the recipients were decorated for actions in Afghanistan, while the third was decorated for his actions during the Vietnam War. This auction ends on February 18th.

Oh, and it should be noted that Dave Taylor will assemble and paint up your HQ choice, so not only are you helping out our Aussie friends, you are getting a complete army to build and paint as you choose, a bunch of cool extras, and your HQ done up by Dave. What's not to like about that?

Bid early, bid often, and help out those who can use it right now. Of course you can always go straight to the Queensland Government website and donate from there, too.
Posted by TopKat at 12:42 AM No comments:

Back in December, I noted the crazy amounts that a couple of WEG Star Wars minis went for. So I thought I'd start a new monthly feature where I share what various minis have been going for on eBay, Craigslist, etc. This time, I'm covering December 2010 and January 2011, but moving forward I'll most likely only cover a month at a time. So here we go!

Citadel: I loves me them Citadel giants, but $54.08 for one of the C28 giants was too rich for my blood. I'll keep holding out, and try to pick one up in some random lot like I did here.

Reaper: The Deep Pockets award this time around goes to the collector who picked up a pair of DOOM minis for a whopping $96.99! Does anyone even play DOOM anymore? BFG, indeed.

Thunderbolt Mountain: Fred! Charly! Where's my wallet? This super-cool and rare vintage set went for a fairly modest $76.50, so that's what, just under $10 per mini?

West End Games: Star Wars just keeps raking in the big bucks all these years later. To go along with the Tauntaun and AT-PT (see the first link), the Snowspeeder sold for a cool $61.

So yes, there seems to be no shortage of well-heeled (or credit-extended) collectors out there who love to spend large on rare, carded, boxed, and shrinked minis. There are already a couple of doozies for next month, so stay tuned for the February report sometime in early March. Thanks for stopping by!
Posted by TopKat at 12:17 AM No comments:

American Eagles - Thanks For The Memories

For 40+ years, American Eagles has supplied Seattle-area gamers/modelers/train enthusiasts with a place to go and get their fix. Alas, their time has come and they will close their doors on April 9, 2011. Between now and then, they are selling off pretty much everything for 20% to 30% off, and I wonder if the discounts will grow bigger as time winds down.

I paid them a visit today with my youngest son in tow. He picked out a couple of 20-siders (one for him, one for his older brother) and I bought a Reaper mini (3333 Boneflail) and some Woodland Scenics Field Grass. And as a belated birthday present for my father-in-law who collects patches, uniforms and other Vietnam-era artifacts, a small illustration entitled "The American Soldier, 1965 - Army Aviation, Cavalry, and Special Forces Officers - Troops boarding helicopters" that used to grace their walls.

I chatted with the gentleman behind the counter briefly, mostly to say thanks for the memories. I used to stop by their store back in the day, when it was in the Greenwood neighborhood, a true gamer's paradise. Books, modules, accessories, and for me - tons of lead. He showed me a scrapbook one of the customers put together for the store. Pictures, articles, ads, you name it. An old-fashioned hold-it-in-your-hands album that is a nice tribute to the store.

Over the years, I tried to make it there a couple of times a year. Browse the gaming section, scour the lead section, buy a model or two, a can of paint, something, anything. It was just one of those places I could go and wander around in.

Eagles will soon join USS Enterprise (Kirkland) and Triple Alliance (Bellevue) in the sad ranks of gaming shops that have closed their doors. At least Eagles stayed around a lot longer than the other two. Still, it's a bit sad to lose a connection to my gaming past.

I'll have to go there at least one more time before they close their doors for the last time.

All good things must come to an end, I suppose. Damn.
Posted by TopKat at 7:19 PM No comments: 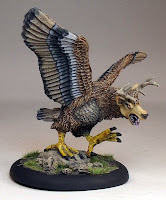 For those of you who run old-school campaigns or collect old-school monsters, here's a new miniature of an old favorite, the Peryton from Center Stage Miniatures.

It's a Jason Wiebe sculpt (who has also done a lot of work for Reaper), and personally I like this one better than the Ral Partha 11-530, which is pretty rare and therefore too pricey for the average gamer/collector.

According to this thread on the Acaeum.com forums, the Peryton is $10.50, or $9.45 during the limited pre-order. The Center Stage Miniatures shop can be found here. Check out the Sahaug...I mean, Sea Devils. Great sculpts! Might have to pick me up one or three.

You can also check out product news on the CSM blog.
Posted by TopKat at 9:53 AM 2 comments: