$2,605.00 (USD). Two thousand six hundred and five dollars. That's what some deep-pocketed collector shelled out tonight to own this miniature:

Grenadier produced a small handful of these lizardman minis in 1977 and gave them to some TSR employees when they were attempting to secure the rights to produce official AD&D minis. This is what Paul Stormberg of The Collector's Trove has to say about it:

"According to Jeff Leason this miniature was a promotional figure given to the very few employees at TSR in 1977 to curry favor with the company and get the lucrative miniatures license from TSR. The rest is history, as Grenadier went on to create some of the most memorable miniatures as part of their Official Advanced Dungeons & Dragons line. Occasionally, spare copies would show up in The Dungeon! Hobby Shop.

The Lizardman Logo miniature for TSR was copied from an illustration inside the front cover of D&D Supplement I: Greyhawk by Greg Bell. The miniature is very exacting in detail and is a virtual copy of the original drawing. Clearly an effort by the Grenadier sculptor to show off his talent and win the license for his company. Amazing!

The only other times I have seen this miniature at auction was in 2004, when The Collector's Trove ran it's first auction for Dave Sutherland III, and then again in 2007 when The Collector's Trove ran an auction for TSR employee Kevin Hendryx. However, this is the first time I have ever seen this miniature for auction where it is still in it's original packaging!

A piece of gaming history! Don't let this one slip away this miniature is a true crown jewel for the serious TSR and miniature collector!

This item comes from personal collection of Jeff Leason!"

So there you have it, a miniature that actually deserves to be tagged as rare. This makes three copies that have been sold by Paul (all from former TSR employees), and I have seen three more owned by Acaeum members (two collectors, and one former TSR employee). I wonder how many others might be sitting around gathering dust or hidden away in a box somewhere?
Posted by TopKat at 1:31 AM 2 comments:

Something old and something new!

It's been forever and a day since I last posted (August, if you're keeping track). But I've been busy in the past couple of weeks, painting some Christmas miniatures and assembling a piece of movie heavy metal (I'll go into those topics in the near future).

First, something old: Today I received my 54mm Wandering Shaman by Broadsword Miniatures. I was eyeing some Broadsword giants that had been on eBay, but ended up with the Shaman. It was only $22.46, which is about the same as an Otherworld giant (the 28mm ones, not THE Otherworld Giant). 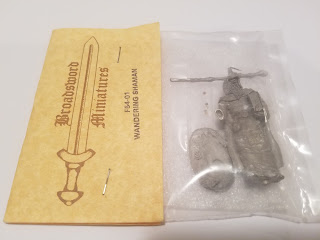 The first thing I thought of when I saw the Shaman was Allanon the druid from the Shannara books. I think it would be too easy to paint up the Shaman as a wizard or necromancer, but I'm thinking dark and subdued earthy tones would look great. And if I'm feeling really ambitious (ha!) I could even take a stab at a monochromatic scheme.

Moving on to something new: I finally have some Otherworld giants! These have been on my wish list pretty much since they were released, but the prices have kept me at bay. But the good people over at Northumbrian Tin Soldier are clearing out their Otherworld stock at 50% off, so how could I NOT finally buy some giants? I picked up the Giant Alliance (Hill, Stone, Frost, Fire), a Cloud Giant, and a Carcass Scavenger (carrion crawler) for $76.11 USD including shipping from the UK. 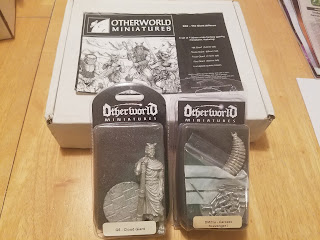 It looks like the giants are all gone, but there are still some Otherworld bargains to be had at NTS. Oh, and if you are a fan of the movie Time Bandits, check out the Time Robbers line of minis. "Mom, dad, don't touch it! It's evil!!!"

This haul brings my Otherworld collection up to 8 now. 5 giants, a carcass scavenger, a gelatinous cube, and a purple worm.
Posted by TopKat at 12:44 AM 1 comment: