OK, this is something I would not have predicted: the melding of a pure, wholesome family comic and the grim darkness of future. Give that boy a power sword and a melta gun.

Happy Halloween!
Posted by TopKat at 10:28 AM 2 comments: 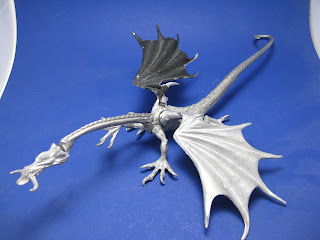 My painting prodigy son turns 10 today (Happy Birthday Mr. Frodo!), so I have given him a pair of dragons to paint: the above pictured RP Black Dragon of Fire & Darkness (10-460) and Grenadier's classic AD&D Dragon's Lair (5009). The RP dragon is missing the horns/frill, and the Grenadier dragon needs a treasure pile to sit upon, but right now those minor details don't trouble Frodo too much. He just loves painting dragons!

Oh, and he's also getting a BB gun and shooting glasses, so hopefully he won't shoot his eye out.

Happy birthday, son.
Posted by TopKat at 12:52 PM No comments:

Oh no, not another miniatures-themed Kickstarter! Oh yes indeed. Paymaster Games has launched a Kickstarter for their Going Native: Warpath rules and miniatures. If you have any interest in a tabletop miniatures game based on Native American and Pacific island warrior cultures, you should take a look at Paymaster's KS and see what they have in the works.

I'm not much of a historical gamer, but I wouldn't mind some Pacific NW-themed warrior miniatures to paint up. The local tribes are such a rich part of Washington state history, and it looks like Paymaster has a great concept for introducing some really cool Native American miniatures to the market. Good luck!
Posted by TopKat at 5:28 PM No comments: 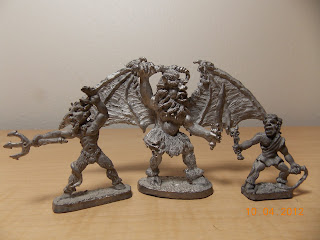 As the CSM Demons & Devils Kickstarter winds down (just over two days left!), I wanted to trot out some of the various underworld denizens from my own cases and shelves. March seems so far away right now, but I'm really looking forward to doing a follow-up to this post when I can show all the shiny new CSM minis with the ones I'm showing today.

The pic above shows a trio of vintage minis from Superior Models Inc. They are (from left to right): WL-113 Large Devil/Pit Fiend; WL-071 Surtur The Fire Giant; and WL-098 Baalzebul Arch Devil. Surtur looks a LOT like a balrog to me and unlike any fire giant I've ever seen. If it walks like a cloven-hooved duck and carries a nasty-looking sword and whip, that makes it a balrog to me! I love the old Superior stuff, even if a lot of it tends to be on the smallish side of the scale. 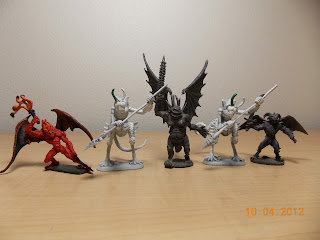 Next up we have some offerings from Ral Partha. The balrog is 01-003v3 - upon closer inspection, you will notice that he has been "fixed" in dog-speak. When I was much younger, I was somewhat disturbed by his realistic anatomy, so I took my Xacto knife to him and did a little nip tuck. Ah, the folly of youth. On the far right is another common RP demon: 02-954 Demon Lord from All Things Dark & Dangerous. He's got that classic demon look but isn't terribly imposing size-wise. Flanking the Pit Fiend in the middle are my AD&D Ice Devils (11-640 Greater Gelugon). They each sport one green horn because they came to me damaged, so I repaired them with wire and Greenstuff. You can read the older posts here and here that go into detail about those fixes. I really like the Ice Devils for the most part, I just wish their necks were shorter, though. The Pit Fiend in the middle (11-648) is a nasty-looking critter, no mistake about it. The bloated body, ghoulish grin, and wicked club just really can't be beat. I also like that I only paid whatever the retail price was back in the day instead of the massively inflated prices he commands these days. 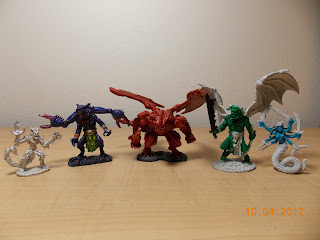 And here are some current offerings from Reaper, who boasts an excellent assortment of demons and devils, many that look like they walked off the pages of a certain manual that has monsters in it. From left to right we're looking at 2672 Clawed Devil; 2656 Demon Marbrezuk; 2895 Agramon Pit Fiend; 2654 Narglauth Fire Demon; and 2633 Vandorenda Demon. What I like about this bunch is that they are all very close representations of various AD&D demons and devils, but they are much closer in size and scale than their older counterparts. 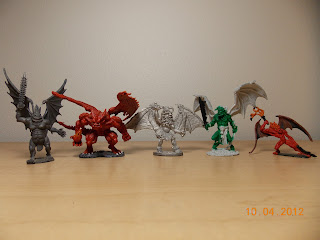 This group shot of balrogs and pit fiends gives you a great idea how they all compare scale-wise. 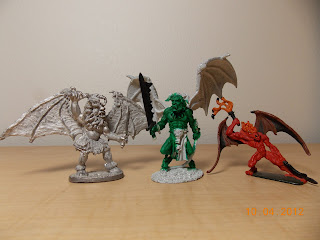 Here are just the balrogs. 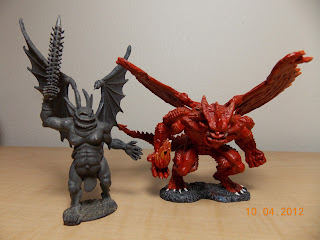 Followed by just the pit fiends.

I know I missed a few (11-654 Barbazu) and the old balrogs from Grenadier and Heritage (the Heritage LoTR balrog is tiny - man-sized at best). I'll have to round those up for my demons & devils follow-up this spring. Give now and give often to the CSM Demons & Devils Kickstarter! And if underworld fiends aren't your cup of tea, how about the massive King of Evil Dragons for only $75? You know you want to!
Posted by TopKat at 10:30 AM 2 comments: 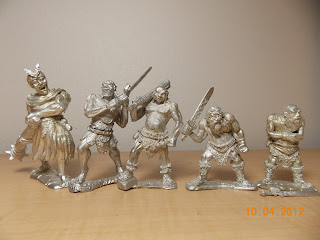 Did someone say Jolly Green Giant? I didn't think so! Here's a pic of The Usual Suspects, CSM giant-style. From left, we have the Cloud Giant, Fog Giant, Mountain Giant, and Firbolgs. They belong to CSM's Advanced Fantasy Miniatures Giant range, and I thought I'd give you giant fans and collectors a bit of a review, especially if you are considering any of these bad boys as Add-Ons for the CSM Demons & Devils Kickstarter. 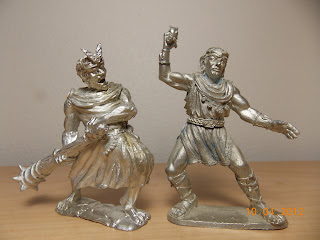 Here's the CSM Cloud Giant posed alongside his venerable yet popular Ral Partha 11-440 counterpart. He's a big hunk of metal, weighing in at 5.4 ounces (150 grams). This is a single-piece casting, so hooray, no assembly required! His massive spiked club looks a LOT meaner than the RP flail, and his fangs give him a decided "more evil than neutral" vibe. And his crown or circlet really gives it that First Edition look, along with his robes and accessories - an hourglass and belt pouch. The only thing that seems odd to me are the hands - his right hand grips the club no problem, but the left hand looks out of place on top of the butt end of the club. Also, I think I would have liked his head to be a bit more upright (when you look at it from a higher angle, it's tipped down to the right a bit). But maybe that's just me nitpicking, because it's still a wonderful sculpt overall. 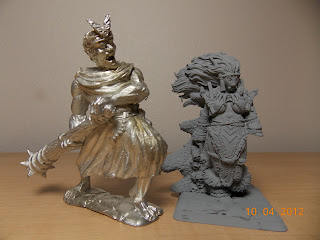 For a 28mm comparison, here is the CG posed next to Reaper's Frost Giant Princess (without her massive spear). 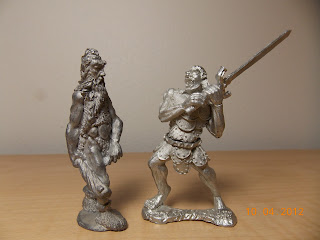 Next up is the CSM Fog Giant, shown with a true classic from Ral Partha, the 01-057 Frost Giant. The Fog Giant is a three-piece casting: lower body from the belt down, upper torso, and sword/hands. It only took some minor scraping and filing to mate up the two body sections nice and secure. And I really like the peg that Nic sculpted on the left arm - just slide the hand on the peg and line up the right hand with the arm stump and you're done. The sword is almost two inches (5cm) long, which gives it a lethal look for sure. I'm not crazy about the hilt, but that's my only critique. Good action pose, and a fierce roaring face that matches up with the giant's demeanor. 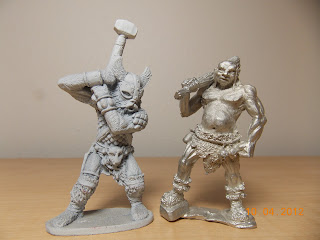 The CSM Mountain Giant is a real looker in my opinion. Here we see him out on the town with his good buddy Snow Giant (number 035 from the second series of Grenadier's Fantasy Lords). The Mountain Giant is a two-piece casting, and I had zero problems pinning his right arm to his body - they meet very nicely at the shoulder. The heads dangling from his belt (next to his left hand) are a lovely touch, and don't be fooled by his beer belly - just look at those guns he's flexing! His balding head and tree-trunk club round out this giant package. I can also see him painted up as a Hill Giant or even a Stone Giant who joined the Hair Club for Giants.

I forgot to snap a pic of the Firbolgs, but of course you can see them on the right side of the first picture above. They may not be rocking the extra-wide beard and 'stache like RP 11-419, but they are a mean couple of mutha-truckers to behold. Both are two-piece castings, and the one holding a sword in his right hand has a small pin and pilot hole molded in, so pinning it was that much easier. And the other one (holding his sword in front of him) has a small hole in one of the stones on the base so you know exactly where to place the tip of the sword when gluing it into place. They both look very tribal in a Celtic sort of manner, but could always pass as handsome ogres or small but well-groomed hill giants. 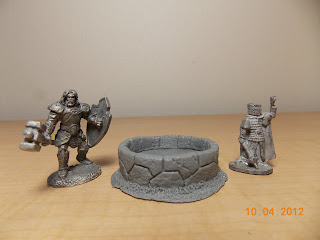 And finally, here's a little bonus for everyone who made it to the end: two adventurers taking a breather next to a basin of cool, clear water... 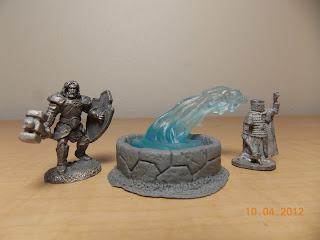 SWEET CALAMITY JANE! It's a CSM Water Weird, and it's about to grab the hapless RP cleric. I have the basin set between the 28mm Reaper mini on the left and the 25mm RP mini on the right to give you some scale reference. The resin basin is about 1 and 3/4 inches across and a half-inch high without the Weird. It might be hard to see in the picture, but the Weird's face has a good draconic or reptilian look about it, and seems a lot closer to being 10' long as described in the First Edition Monster Manual. A great bit of dungeon terrain with the added bonus of being able to table the Weird when you are good and ready to scare the crap out of the adventuring party!

Next up is a gallery of demons and devils to look at and compare while we wait for the CSM Kickstarter to wrap up and then begin the wait until the CSM minis arrive next spring. Rock me Asmodeus!
Posted by TopKat at 1:57 AM 2 comments: