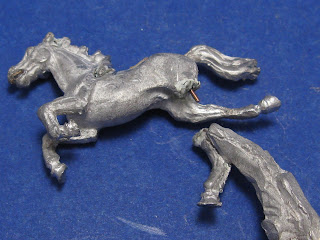 Don't worry, Seabiscuit, we'll have you fixed in no time.

So I've been in a bit of a painting funk again. What I need to do is just sit down and paint! In the meantime, I've been cleaning and organizing the workbench, shelves, and cases in an attempt to put some order to my lead chaos. I took some pics of minis available for trade or perhaps listing on eBay. I'm working on updating my trade folder on Photobucket, so if you ever see anything there that catches your eye, please let me know.

Last night, it was time to start fixing things. I recently received the above pictured Bellerophon riding flying Pegasus by Superior Models as part of my recent Grenadier boxed set purchase. Sadly, the pegasus is suffering from a broken leg, right where the left rear leg attaches to the rock outcropping part of the base. This minis is way too nice to be left in such a sad state that I started to pin it last night. It's probably going to need a dab of Greenstuff to smooth the boo-boo, but that is pretty minor all things considered.

Next up, a Citadel C28 giant that appears to have lost his neck - he came sans head, but it looks like someone snipped off his neck: 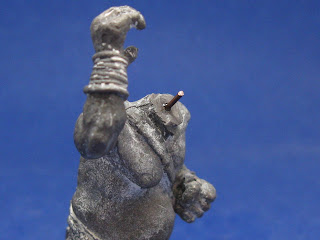 That's Mr. Pinhead to you, bub.

I'll reconstruct his neck with some Greenstuff in short order. Speaking of pins and Greenstuff, my final project of the night has been sitting on my Shelf of Shame for a year or two now: 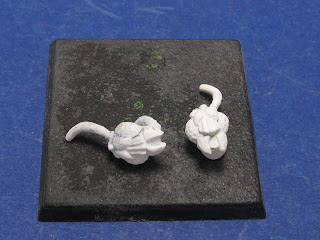 The only good bug is a DEAD bug!

I picked up a pair of Ral Partha 11-640 Greater Gelugons as part of a Planescape lot, but sadly, both Ice Devils were missing their right antennae. Back then, I figured I could make replacements out of Greenstuff, but they would more likely than not break off at some point down the road, as most of my fantasy minis are destined for use on the gaming table. How would I prevent that? Last night, the answer came to me. Drill a hole in their heads, insert a thin piece of rod, and use Greenstuff to build it up to proper thickness: 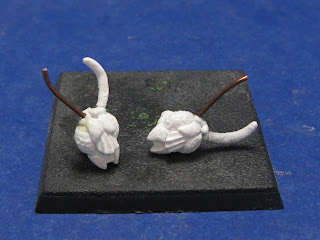 We come from the Island of Misfit Lead...

This pic shows the heads with pins glued into place and snipped off slightly longer than I need. Once I shape the pins to my liking, the excess pin will then be trimmed. It's like my dad always said: "Son, measure twice, cut once." The man is a veritable font of old-school wisdom.

I wish I remember exactly what blog I was reading when I saw a picture of someone using a pin and then building up Greenstuff around it to make a horn or appendage, because that's exactly where this inspiration came from. So thank you, fellow modeler!

Pics of the finished repairs should be up in the next week or so, and hopefully by then I'll have tossed aside my goldbricking ways and finished painting something as well.
Posted by TopKat at 9:41 AM

Very nice, I was just about to post some re-habbed minis. When I read about pin vises and using wire to reinforce joints, it was like the scales had fallen from my eyes and all those broken minis were usable again. I think I first read about it in White Dwarf back when that was good magazine (5, 10, 20 years ago, according to when you stopped reading it :) ).