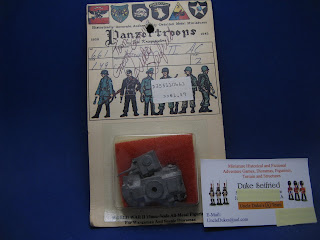 Back in early September, I picked up a lead version of one of my favorite WWII armored cars, the Humber Mk. II. I built several 1/72 Daimlers and Humbers back in the day, and still remember fighting various North African battles that pitted our plastic Afrika Korps versus Monty's Desert Rats.

The lead Humber I speak of is a 15mm model from Der Kriegspieler's Panzertroops line. It was sold to me by none other than Duke Seifried, the man known affectionately to wargamers and miniature enthusiasts as Uncle Duke. It's a hefty little chunk of lead, weighing in at 3.2 ounces (90 grams). 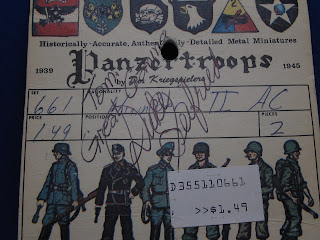 I'm usually not the fanboy type, but this time I just couldn't help myself. I asked Duke if he would sign the blister card, and he seemed happy to oblige. As if the hand-written product details on the card itself weren't a neat touch, it now reads "Tom, Great Gaming, Duke Seifried" on the front. He also included one of his business cards (shown below with his address and phone numbers concealed). 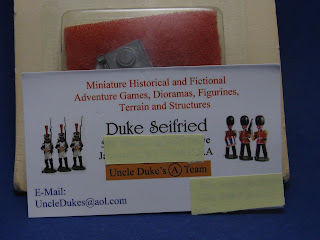 Sure, it's not as cool as if the Humber had been painted and used by Duke himself, but I think it's more along the lines of something a bit larger than a piece of lead. It was the personal interaction, a legend in the miniatures industry who was nice enough to honor a small request from someone who appreciates the man and his body of work (10,000 miniatures sculpted, according to various sources on Al Gore's Internet). That's a rather substantial body of work!!!

Here's a link to Duke on BoardGameGeek, an old picture of him on Lost Minis Wiki, and a more recent picture on the Historicon website.

I'll be sure to post pics of the Humber once I have it properly painted up.

I'm not 100% positive, but it looks like the old Panzertroops line is still available through Old Glory Miniatures. This Humber looks a lot like mine, except that it appears to have been updated or possibly resculpted altogether. I might have to shoot them an email and see if they can shed any light on the fate of Panzertroops.
Posted by TopKat at 11:12 AM