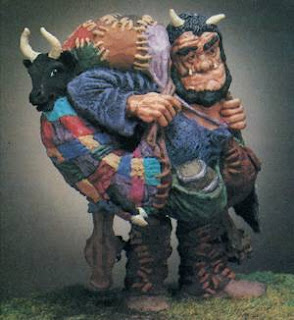 This bearded brute is Hrugnir. He is a giant, and he is carrying his loot. His loot consists of at least one bovine and one dragon, and other things carried in his sacks, pouches, and quilts of many colors.

In the world of miniatues, he is known as GI8 or GI-8, Hrugnir the Giant Carrying His Loot, and he was produced by DragonTooth miniatures.

Earlier tonight, someone (not me) paid $119.50 to add him to their collection. You can see the ended auction here. I was ready to join the bidding, right up until the point where I saw it had gone from a start of $9.99 with three bids from the same bidder and the reserve not met to $100 as the same bidder upped the ante. Too rich for my blood! Not suprisingly, a sniper popped up at the last second with the final and winning bid.

This is the first copy of Hrugnir that I have seen in the past four or so years on eBay. It's quite possible I may have missed others, but even then, it would have to be only a small handful, say perhaps two or three copies, if that? I suppose the bidding could have been even more active if the seller had properly identified it, instead of listing it as "Dungeons & Dragons AD&D 3-1/2" Dwarf Carrying Cow Dragons RARE MINT" in the title.

I guess it's just fun to see that one actually popped up for auction, and that hopefully some collector is now eagerly awaiting Hrugnir to wing his way through the postal system and arrive in his new home. Of course I think he would have looked just smashing alongside my copies of Big Meg and the Horned Hill Giant, but I'll just have to keep my eyes peeled for another one. And it wouldn't hurt to start stashing away a few extra bucks too. I'll call it my Rainy Day Hrugnir Fund, and yes, feel free to contribute to the fund.

(Picture from the Stuff of Legends)
Posted by TopKat at 12:50 AM

That is an awesome giant. I remember him from a Dragon ad, and thinking he looked a lot like one of the guys in that coffee table book by Dave Larkin. $120?!? Dang.

Well found! A great mini, picked my copy up some years for a little less than that I think but it is getting rarer all the time! I am desparate for the Kali and Thor minis but they seem ever rarer......

Hrugnir's loot bag must be full of $$$

I actually picked up a photo of this off ebay a while back - possibly the picture used for the original ads - Has GI-8 stamped on the back - I'm not aware of it being boxed on any form.... Pic on my DT yahoo group;

@Mike - what book are you talking about? The name Dave Larkin rings a bell, but that's about it.

@TheDozingDragon - agreed, the DT gods also seem to be very rare minis. I've been looking for Assur to paint up for a friend of Persian descent, with zero luck to date.

@Scott - if you defeat him, I guess he would considered "in lair" when you determine his treasure type. The buyer's pockets must have been full of $$$ too.