Really? Favorite Magic Item? How can anyone possibly pick just one??? I can't. There are so many choices it makes my head spin! Old-school artifacts (Wand of Orcus, Axe of the Dwarvish Lords, Hand & Eye of Vecna, etc.) are givens, as are Rings of Three Wishes, Vorpals, Holy Avengers, Cubes of Force...too much good stuff. So I'll take the easy way out and give my favorite magic item by type, as gleaned from the original DMG: 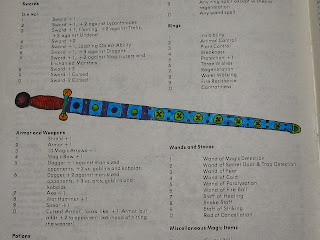 POTION: Gotta go with healing potions here. How many times has the cleric/paladin/druid gone down and the only thing that stood between life and TPK was a potion of healing? Too many times by my count. Honorable mention goes to invisibility. Very handy for anyone needing to sneak into/out of a sticky situation.

RING: Multiple Wishes. 'Nuff said. Runner-up would be Free Action. I once famously (infamously?) raised my middle finger to my DM and stated "free action" when he attempted to hold me. And he has never, ever forgotten that small act of defiance. Pretty much a long-standing joke with the group. Oh, and I'm pretty sure my current wizard would kill for a Ring of Wizardry.

ROD/STAFF/WAND: Staff of the Magi would be a tempting pick, but I have to go with Rod of Resurrection. Honorable Mention goes to Wand of Magic Missiles, back when a certain house rule allowed for expenditure of ALL charges in a single round, effectively turning it into a tommy gun. Mon-ty!

MISCELLANEOUS: Almost too many choices here (Apparatus of Kwalish, Cube of Force, Daern's Instant Fortress, Deck of Many Things, Manuals/Tomes, and Portable Hole among others) but it really comes down to the versatility and strength of the Cube of Force.

ARMOR: Pretty easy due to the small variety of old-school magic armor, so Plate Mail +5 it is.

SWORDS: No blade was more coveted and feared than a Vorpal Sword. Unless you were a paladin and always hoping for a Holy Avenger, of course. Runners-up are the Giant and Dragon slayers, as the double and triple damage respectively were absolute money when fighting those creatures.

MISC. WEAPONS: For my money, the only pick here is the Trident (Military Fork) +3. April Fool! Pound for pound, the Hammer of Thunderbolts is wicked awesome. And if you happen to have a girdle of giant strength and gauntlets of ogre power, it is time to solo the G series.
Posted by TopKat at 10:23 AM